daajis.com:- Many people view Donald Trump as the most dangerous man on the planet, but next week he flies to Saudi Arabia for a three-day visit during which he will meet a man who surely runs him a close second as a source of instability.

This is deputy crown prince Mohammed bin Salman, 31 – the de facto ruler of Saudi Arabia since his father King Salman, 81, is incapacitated by old age – who has won a reputation for impulsiveness, aggression and poor judgement in the two-and-half years he has held power.

Early on he escalated the Saudi role in Syria, thereby helping to precipitate Russian military intervention, and initiated a war in Yemen that is still going on and has reduced 17 million people to the brink of famine. Combine his failings with those of Trump, a man equally careless or ignorant about the consequence of his actions, and you have an explosive mixture threatening the most volatile region on earth.

Prince Mohammed, who is also defence minister, is not a man who learns from his mistakes or even notices that he has made them. Less than a year after his father became king in January 2015, the BND German intelligence agency issued a warning that Saudi Arabia had adopted “an impulsive policy of intervention” abroad and blamed this on the deputy crown prince whom it portrayed as a naïve political gambler.

The degree of alarm within the BND about his impact on the region must have been high for them to release such a document which was swiftly withdrawn at the insistence of the German foreign ministry, but its predictions have been fulfilled disastrously in the following eighteen months.

The deputy crown prince is turning out to be not only a gambler, but one who recklessly raises his stakes when in trouble. Proof of this came in an extraordinary but under-reported interview he gave earlier this month, broadcast on al-Arabiya TV and Saudi TV, in which he threatens military intervention in Iran. “We will not wait until the battle is in Saudi Arabia, but we will work so the battle is there in Iran,” he says.

Speaking in highly sectarian terms, he claims that the Iranian Shia leaders are planning to seize Mecca and to establish their rule over all the 1.6 billion Muslims in the world. He believes that “their logic is based on the notion that Imam Mahdi will come and they must prepare the fertile environment for his arrival and they must control the Muslim world.” His diatribe is as anti-Shia as it is anti-Iranian and likely to provoke fears among Shia in Iraq, Lebanon, Pakistan and Saudi Arabia itself, where Shia make up a tenth of the population, that they will be the victims of an anti-Shia crusade.

It is absurd to imagine that the four or five Shia countries have the ambition or the ability to take over the fifty or more that are Sunni, though Sunni fundamentalists accuse tiny Shia minorities in countries like Egypt, Tunisia and Indonesia of plotting to do so. Prince Mohammed appears to give credence to the theory of a grand anti-Sunni conspiracy orchestrated by Iran, saying that, since the Iranian revolution in 1979, Iran has been trying to “control Muslims in the Islamic world and spread the Twelver Jaafari [Shia] sect in the Islamic world so Imam Mahdi comes.”

There is more at play here than Prince Mohammed whipping up religious and nationalist feelings in Saudi Arabia to secure his own power base and fend off his rivals within the royal family. None of his foreign ventures have so far achieved their aims: in Syria in the spring of 2015 Saudi Arabia gave support to the so-called Army of Conquest, consisting primarily of the al-Qaeda affiliate the al-Nusra Front and its then ally Ahrar al-Sham.

This won a series of victories against pro-Assad forces in Idlib province but their success led to Russian military intervention later the same year that was a turning point in the war. Saudi influence was marginalised, something that he blames on “former American President Barack Obama [who] wasted many significant opportunities he could have seized to achieve great change in Syria.” In practice, Saudi Arabia was hoping for US military intervention to enforce regime change in Syria along the lines of Iraq in 2003 or Libya in 2011. Obama was privately critical of Saudi actions and the tradition of the Washington foreign policy establishment of giving automatic support to Saudi Arabia and its allies.

Nevertheless, in Yemen Mr Obama gave backing until the last days of his presidency to the Saudi-led bombing campaign which has been devastating the country since March 2015 but has so far failed to win the war for the Saudis’ local allies. It has brought terrible suffering to the Yemeni population of 27 million, of whom the UN estimates that 17 million are “food insecure” including 3.3 million pregnant and breast-feeding mothers and children, some 462,000 under the age of five, who are “acutely malnourished” or, in other words, starving. 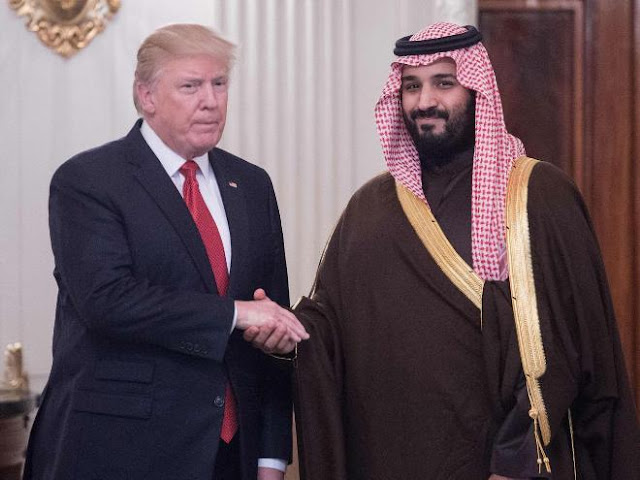 Saudi-backed forces are poised to attack the Red Sea port of Hodeida, through which come 80 per cent of Yemen’s imports which make up most of its food supplies. If the port  is closed then Yemenis will face the worst man-made famine since Mao Tse-Tung’s Great Leap Forward. Prince Mohammed says the war is all but won, though, mysteriously, in finishing off the other side, “thousands of our troops can fall victims. There will be funerals in all Saudi cities.”

Trump has already ordered greater US support for the Saudi war effort in Yemen, but the deputy crown prince will be primarily bidding for US backing for his confrontation with Iran. Words are already turning into action with reports of the US and Saudi Arabia being at one in planning to stir up an anti-government insurgency among minorities in Iran such as the Baluchis in the south east, something that has been done before but with limited impact.

Saudi leaders were overjoyed by the election of Trump whom they see as sympathetic to them and the Gulf leaders whom he will meet after he arrives in Saudi Arabia on 19 May, before going on to Israel.

It is a chilling tribute to the authoritarian instincts of Trump that his first foreign visit as President should be to the last arbitrary monarchies left on earth and to a state where women are not even allowed to drive. On the question of confronting Iran, he is unlikely to be restrained by his Defence Secretary, James Mattis, and his National Security Adviser, HR McMaster, both former generals scarred by America’s war in Iraq, where they see Iran as the main enemy.

The White House is doubtless conscious that the one-time Trump has won universal plaudits in the US was when he fired missiles in Syria and dropped a big bomb in Afghanistan. Trump and Prince Mohammed may be very different in some respects, but both know that fighting foreign foes and waving the flag shores up crumbling support at home.