US Deploys Patriot Missiles to Philippines

US Deploys Patriot Missiles to Philippines

daajis.com:- The United States (US) has deployed the Patriot missile defense system to the Philippines, media reported on Monday (4/4/2022).
" This is "the first time as part of the annual joint war games", reports the Philippine daily Inquirer.​​​​​
The Patriot missile system has been deployed at Aparri in Cagayan province, which lies in the northern Philippines facing southern Taiwan, he said.
This is the first time the US has deployed a defense system overseas by land and sea, the report added.
The US and the Philippines are holding the "largest ever" joint military exercise on the island of Luzon from March 28 to April 8.
A total of 5,100 US military personnel and 3,800 Filipino troops are taking part in the exercises in the island nation.
The joint military exercise, known as Balikatan 2022, focuses on "maritime security, amphibious operations, live fire training, urban operations, aviation operations, counter-terrorism, humanitarian assistance, and disaster relief," according to the US Embassy in Manila.
American and Filipino soldiers practice joint landings, parachute jumps, and direct shooting drills. 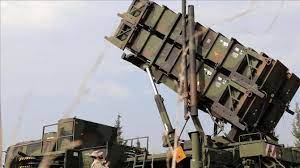 Meanwhile, Philippine Foreign Minister Teodoro Locsin and Chinese State Counselor and Foreign Minister Wang Yi held bilateral talks in east China's Anhui province on Monday.
“Both agreed that maritime issues should be placed in their proper place in bilateral relations. It is very important to prevent inappropriate steps that could disrupt or even damage bilateral relations and stability in the South China Sea," Chinese Foreign Ministry spokeswoman Hua Chunying said in a brief statement on Twitter.
Wang stated that China is ready to work towards the goal of building the "five houses", including one that is peaceful, safe, serene, prosperous, beautiful and friendly to ASEAN countries as conveyed by Chinese President Xi Jinping.