Three ATMIS soldiers killed in a shooting at Halane Compound

Three ATMIS soldiers killed in a shooting at Halane Compound

daajis.com:- A soldier from the Special Command Forces (SFC) Unit, part of the African Union Transition Mission in Somalia (ATMIS), shot and killed three of his colleagues at the Halane compound in Mogadishu on Monday, according to sources.
The incident happened at the Aljazeera gate at Halane compound, the headquarters of the Ugandan Contingent of ATMIS, previously known as AMISOM.
According to an anonymous source, the suspect, a corporal, had a dispute with a lance corporal the previous evening.
The following morning, the corporal is said to have followed his colleague to his quarters and shot him dead. As the suspect returned to his position, he also encountered another colleague and shot him. A third soldier who came to investigate the commotion was also shot and killed.
The suspect reportedly ran out of bullets and was subdued and arrested by a nearby soldier before additional help arrived.
The Uganda People’s Defense Force (UPDF), which provides the majority of troops for ATMIS, initially declined to comment on the incident. However, UPDF spokesperson Brigadier General Felix Kulaigye later confirmed the shooting to New Vision Newspaper in Uganda and affirmed that the suspect would be tried by a field court martial in Somalia.
The identities of the victims and the motive for the shooting have not yet been established. After the shootings, the entire camp was put on alert.
This is not the first-time soldiers serving with ATMIS have been involved in shootings.

In May 2019, several soldiers shot themselves, while in June of the same year, a UPDF captain shot a colleague before turning the gun on himself.
In October 2022, the army’s appellate court overturned the death sentences of two soldiers who, along with three others, had been convicted of killing seven civilians in Somalia.
The Halane compound, where the shooting took place, is a heavily guarded area in the capital city of Mogadishu that serves as the main base for the African Union Mission in Somalia.
It is located near the Aden Adde International Airport and is home to various international organizations and diplomatic missions.
The compound has been targeted by terrorist attacks in the past, leading to increased security measures being implemented to protect the personnel stationed there.
The African Union Transition Mission in Somalia (ATMIS) is a regional peacekeeping mission operated by the African Union with the approval of the United Nations. 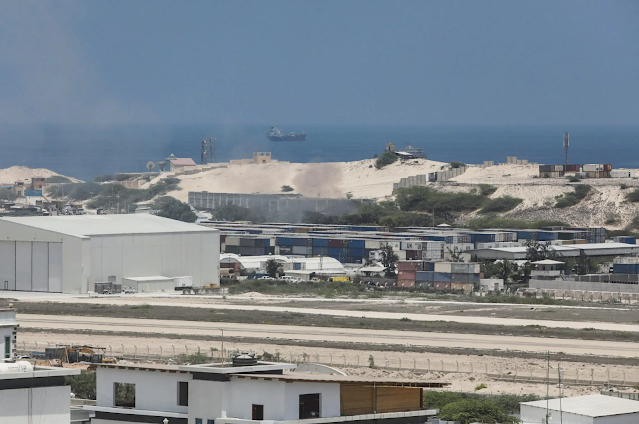 It is headquartered in the capital of Mogadishu and has the mandate to support the Federal Government of Somalia in its efforts to establish stability and security in the country.
ATMIS primarily consists of troops from Uganda, Burundi, Ethiopia, and Kenya, with smaller contingents from other African countries.