Home » News » They came for the American dream. Now they’re fleeing to Canada.

They came for the American dream. Now they’re fleeing to Canada.

They came for the American dream. Now they’re fleeing to Canada.

daajis.com:- Waist-deep in snow, in remote locations close to the border, migrants are braving sub-zero temperatures and the danger of being stopped by border patrol agents to find the American dream — in Canada.

In the past few months, reports suggest hundreds of refugees living in the United States have fled north, hoping to take asylum in Canada. The trend has been growing rapidly since the United States’ election in November. Most of the migrants are originally African, including from Somalia and Ghana. It’s not safe for them to return to their home countries, and they are scared the United States will send them back. Canada, however, offers more hope.

Photos of families being chased by border patrol agents over snowy fields as they attempt to make the crossing show the harrowing process. To file for asylum in Canada, these refugees have to make it over the border illegally.

The risks are enormous.

“They are not used the cold weather we experience — traipsing through farmers’ fields, they don’t have a good destination in mind,” Alastair Clarke said. “I’m just looking outside right now, it’s 2 feet of snow.”

Clarke is an immigration lawyer in Winnipeg, Canada, about 70 miles north of the border. Many of the migrants try to run under the cover of darkness and aren’t properly dressed for the trip. They’re wearing only hoodies and sneakers.

The exodus to Canada is new. Usually only 40 or 60 cross per year. The shift tells the human story of the Trump administration’s immigration and refugee agenda, which is sowing fears with threats of bans and aggressive deportations. Refugees who do not yet have official standing to live in the United States believe their luck has run out and hope Canada will offer them the safety they seek.

From fear and uncertainty to on the run

There’s a refugee purgatory in the United States. Some are neither granted asylum in America nor expelled from the country. Since the election of Donald Trump last fall, a growing number of these refugees have made what once seemed like an improbable calculation: They have abandoned hope for this country and gambled on a risky crossing into one more welcoming to refugees.

The Trump presidency, and its promised hard lines on immigration, has increased those refugees’ fear of being sent back to their home countries. Many of them consider returning to be a death sentence. So instead of going back, some are attempting the forbidden road to Canada.

It’s part of a broader trend. In the past year, immigration services in Canada have become overwhelmed with refugee applicants, most of whom are African in nationality. In 2016, more than 7,000 refugee applicants came to Canada on land — a 63 percent increase from 2015.

“There is a heightened level of fear from refugee claimants coming from the United States,” Clarke said in a phone interview. “There was a huge increase especially after the election.”

Trump — his rhetoric and his policies — is the source of that fear. Since taking office, he has issued an executive order banning refugees from coming to the US for 120 days and forbidding migrants from seven majority-Muslim nations. His administration launched a wave of enforcement raids across the country targeting undocumented immigrants. 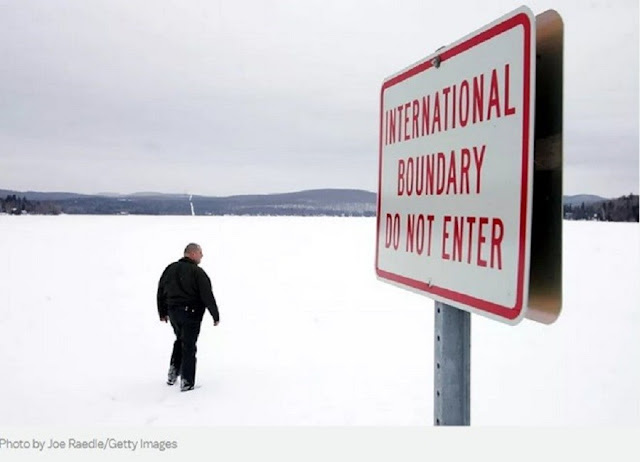 After Trump’s immigration order, Mackler worked in New York’s Kennedy International Airport for nine days straight coordinating volunteer legal counsel. Often she found herself fielding questions from immigrants not at all affected by the policy. “People from Jamaica and the Dominican Republic were asking if they could travel,” she said. “It’s confusion and fear.”

And it’s leading some to risk their lives.

Seidu Mohammad, 24, and Razak Iyal, 35, both of Ghana, were strangers when they partnered for the journey to Canada in December, they told CBC News. They met at a bus stop in Minneapolis before embarking on a trip that would soon put their names in headlines around the world.

Mohammad and Iyal took a bus to Grand Forks, North Dakota, and then a taxi to a snowy field by the border. Each paid the driver $200.

The night Iyal and Mohammad started walking, it was about 0 degrees Fahrenheit. At that temperature, with wind chill, frostbite can occur in under 30 minutes. The men grew disoriented. They stood in the cold for hours until they were picked up by a driver on the highway. Both have since lost fingers to frostbite. That was Christmas Eve.

Others have followed their path, despite the risks.

On February 10, Canadian police caught 21 asylum seekers crossing the border by foot, some families with toddlers, Rita Chahal, the executive director of the Manitoba Interfaith Immigration Council, told CBC News. One week later on February 18 another eight asylum seekers, including four children, fled U.S. border police only just making it into Canada, Reuters reported. Welcome centers like Chahal’s, which offer temporary shelter for refugees, are nervous that they will run out of resources if the numbers of migrants keep pace.

Iyal and Muhammad’s immigration story has become all too familiar.

Both fled Ghana with eyes on the United States. Muhammad went to San Diego in 2015, where he was detained for one year. His asylum request was rejected.

Iyal tried to get in through Mexico in 2012. He was detained for two years before being released on parole. As long as he followed the law and checked in with an Immigration and Customs Enforcement officer every three months, he could stay.

The choice to leave was complicated by an obscure deal between neighbors.

Seeking asylum across a friendly border 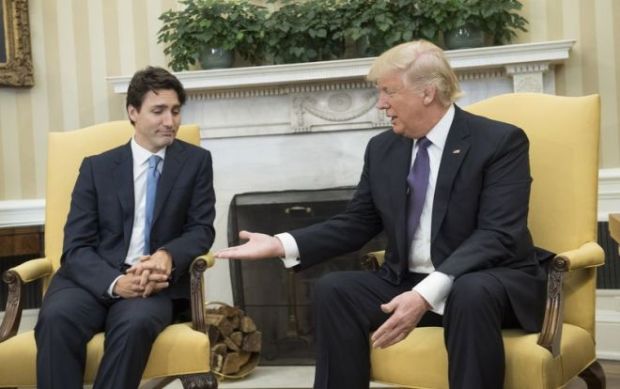 During his visit with President Donald Trump, Canadian Prime Minister Justin Trudeau made it clear that the two leaders have starkly different views on refugees and immigration. Photo by Kevin Dietsch-Pool/Getty Images

Sharing the longest undefended border in the world, Canada and the United States have an agreement on refugees that is now being turned on its head.

It operates on the simple premise that both nations are safe — countries where refugees can claim a right to protection.

The Safe Third Country Agreement, which went into effect in 2004, states plainly that refugees are required to request protection in the first safe country they arrive in. In other words, if you arrive in the United States first, you can’t then trek to the Canadian land border to request asylum. (There are exceptions to this rule, like having family across the border.)

Clarke, the Canadian immigration lawyer, is currently fighting for a Burundian woman to be allowed into Canada. Border police said her sister-in-law was not a close enough relative to be an exception to the Safe Third Country Agreement. She could apply for asylum in the United States, but she doesn’t want to.

“She feels that filing a refugee or asylum claim in the United States is not a viable option for her,” Clarke said. “It’s not for me to question.”
The agreement is why migrants are taking dangerous routes to avoid border checkpoints. It’s a gamble: If they are caught, Canadian officers have to send them back to the United States, but if they make it over the border, they can apply for asylum — even if their refugee status claims were rejected in the United States.

The Canadian definition of a refugee is broader and gives applicants alternative options to prove their identity even without official documentation.

While officials are still abiding by the agreement if they catch people on the border, Canada’s leadership is taking a notably different tone with refugees than Trump’s administration is.

When Trump signed the immigration ban in January, Canadian Prime Minister Justin Trudeau followed up with a tweet. “To those fleeing persecution, terror & war,” he wrote, “Canadians will welcome you, regardless of your faith. Diversity is our strength.”

The declaration of open arms has given refugees another final destination on which to pin their dreams.