daajis.com:- Throngs of Kenyatta supporters celebrated on Monday near the election commission headquarters after hearing the IEBC declare incumbent Uhuru Kenyatta the winner of last week’s highly disputed presidential poll. The re-run of the Aug 8 poll was tainted by opposition leader Raila Odinga’s decision to boycott the polls.

Wafula Chebukati, the head of the IEBC reported that Kenyatta received 98.2 percent of the total vote.

Despite saying that he could not guarantee the credibility of the elections just last week, Chebukati says he is confident that the country has conducted a “free, fair and credible election.”

“I am satisfied that we were able to meet the conditions that enabled the commission to deliver what to us, and I believe to all Kenyans and observers, is a free, fair and credible election,” Chebukati said. “The commission ensured that everything required of us by law put in place for the conduct of the election.”

Kenyatta, who faced no serious contender for the presidency following Odinga’s refusal to take part in the elections, was expected to win by a large margin.

Voter turn out was low. Only 39 percent of Kenya’s 19.6 million registered voters showed up for the re-run compared to 80 percent in August.

Kenyatta was declared the winner in the August polls before Kenya’s high courts annulled the decision citing irregularities.

Consolata Nkatha, a senior election official said that 24 of Kenya’s 290 constituencies did not vote. That includes four counties in Western Kenya that could have delivered opposition leader Odinga close to 2 million votes.

There were widespread reports of polling stations being blockaded by protesters. Many IEBC agents simply did not report to the polls on voting day.

Electoral officials have said that votes from those areas would not have affected the overall result of the election and announced that they have cancelled it completely on Monday.

Barring a petition from Odinga and other opposition groups within the next seven days, Kenyatta will be sworn in for five more years on November 13th.

The vote has been marred by violence as well with reports of Kenyan police using tear gas and live bullets to disperse opposition supporters. Since the initial vote, 78 people have lost their lives in the election-related violence.

On Monday, Amnesty International called out Kenya’s police force for what it called “unlawful force against protesters and bystanders”.

What we are witnessing appears to be punitive policing; a blatant attempt to intimidate and punish residents in the opposition stronghold.

Justus Nyang’aya, the head of Amnesty International Kenya, says the police in Kisumu are shooting, assaulting and even breaking into the homes of suspected protesters.

“What we are witnessing appears to be punitive policing; a blatant attempt to intimidate and punish residents in the opposition stronghold.” 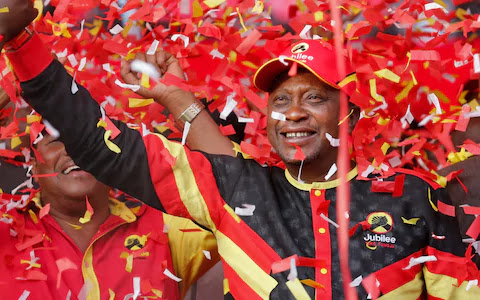 The international community is watching the political developments in Kenya very closely. The U.S. has previously stated that they are concerned about the violence that has occurred since last week’s vote.

Robert F. Godec, the American ambassador in Kenya, said Monday that Kenyans should engage in dialogue “to resolve the deep divisions that the electoral process has exacerbated.”