Home » caafimaad » health » News » 3 Types of Oats and How to Eat Them for Breakfast, Lunch and Dinner

3 Types of Oats and How to Eat Them for Breakfast, Lunch and Dinner

3 Types of Oats and How to Eat Them for Breakfast, Lunch and Dinner

daajis.com:- Known as Avena sativa, oats are a type of cereal grain grown mostly in the United States, Canada, and Russia, according to research published in the Journal of Food Science and Technology. Like quinoa and barley, oats are a type of whole grain. Oats are high in fiber, but that's not the only nutrient that whole grains offer.
Oats also provide energizing carbohydrates and antioxidants that can help prevent free radical damage. Plus, oats are a good source of plant-based protein. While there are several types of oats available - rolled, steel-cut, and instant all processed differently - they have roughly the same nutritional profile. A half cup of rolled oats, according to the USDA, contains 150 calories, 5 grams of protein, 2.5 grams of fat, 28 grams of carbohydrates, 4 grams of fiber, and 0 grams of sugar.
Here are the health benefits of oats:
1. Streamlining digestion
In a half-cup serving of rolled oats, you'll get 4 grams of fiber. There are two different types of fiber and both are found in oats, soluble fiber (which dissolves in water), and insoluble fiber (which does not dissolve in water). Insoluble fiber, in particular, increases the weight and size of your stool and promotes the movement of material through the digestive tract, according to the Mayo Clinic.
2. Help lower cholesterol
Along with that insoluble fiber, oats are rich in beta-glucan, a type of soluble fiber found primarily in oats and barley that is known for its cholesterol-lowering properties, according to research published in Nutrition Review. Specifically, beta-glucan makes a gel-like ingredient that can help clear low-density lipoprotein (aka LDL or "bad") cholesterol from the body.
In fact, research shows that consuming at least 3 grams of beta-glucan from oats daily can lower total and LDL cholesterol levels by 5 to 10 percent, in both people with normal and high cholesterol levels. And these health benefits of oats are important, because high levels of LDL cholesterol can increase your risk of heart disease and stroke, according to the Centers for Disease Control and Prevention.
3. Makes you feel energized and full
Chew on half a cup of oats, and you'll get 28 grams of carbohydrates — a macronutrient that your body breaks down into glucose, which is the main source of energy for your cells, tissues, and organs, according to the National Library of Medicine. And that's the reason why carbohydrates shouldn't be considered bad. "I think it's good for people to remember that they shouldn't cut grains out of their diet, especially whole grains," says dietitian and nutritionist Maya Feller, as reported by the Shape page. "There are so many worthwhile reasons to include it, and it's a great way to get good, sustainable energy from food." 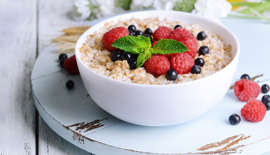 Plus, wheat fiber helps slow digestion and causes a lower, gradual rise in blood sugar, according to the Harvard School of Public Health. In turn, you'll feel full longer and may not experience a major spike in blood sugar — or a drop in energy later, according to the Cleveland Clinic.
4. Build and repair Muscle
Oats may not be the first thing that comes to mind when you think of protein-packed foods, but whole grains shouldn't be overlooked. A half-cup serving provides 5 grams of macronutrients, which help build and repair cells, tissues, and muscles; ensure proper growth and development; and aids in body processes such as blood clotting, fluid balance, and more, according to the U.S. Food and Drug Administration.
That said, the protein in oats is incomplete, says Feller. It lacks one or more of the nine essential amino acids, which can only be obtained from food, that are needed to make new proteins in the body, according to the HSPH.
5. Can prevent free radical damage
In addition to the vitamins and minerals you see listed on the oat nutrition facts label, whole grains offer a variety of phytochemicals — beneficial compounds found in most plant tissues, says Feller. With wheat, in particular, these compounds are mainly found in the bran layer of the kernel, and they have high levels of antioxidant activity, according to a Journal of Food Science and Technology study.
Antioxidants are chemicals that neutralize harmful free radicals, unstable molecules that cause oxidative stress, which can then trigger cell damage, according to the National Institutes of Health. "They help reduce inflammation and stop oxidation [caused by] free radical damage," Feller adds. The potential ability of oats to curb oxidative stress is also important, as it is thought to play a role in the development of cancer, cardiovascular disease, diabetes, and other health conditions, according to Dr.ut NIH.
Before you stockpile your pantry, know that there are a few key differences between the different types of grain on the supermarket shelf. Steel cut oats are whole grains that have been cut into two to three smaller pieces, while rolled oats are whole grains that have been steamed and rolled into flakes, according to the Whole Grains Council. Instant oats, on the other hand, are rolled oats that have been rolled thinner and/or steamed longer. Each variety has a different texture and cooking time, rolled oats have a softer taste in the mouth and cook in five to 10 minutes, and instant oats develop a slightly mushy texture and cook in just a few minutes, according to the Quaker website.
Simply put, your best bet for assessing all the benefits of oats is to choose a variety that satisfies your stomach and taste buds, fits your budget, and can be prepared within the amount of preparation time you have available. Here are some ways to eat oats for breakfast, lunch, or dinner.
- As pilaf. Combine oats with quinoa and fonio, turmeric, black pepper, garlic, ginger, and onions for a savory side dish of pilaf that's packed with protein, advises Feller.
- As warm porridge. Fill your mornings by cooking oats in water, milk, or another liquid of your choice, then sprinkle them with your favorite ingredients, such as berries, nuts, honey, or maple syrup.
- As breadcrumbs. To make a crispy crust on seafood, chicken, or mac and cheese, replace the bread with seasoned oats, he advises.
- As flour. Grind some oats in a blender or food processor, and you've got oat flour that can be used in pancakes, breads, waffles, muffins, bagels, and just about any other baked good you can imagine, says Feller.