daajis.com:- On March 20, 2003, a United States (US) missile hit the Iraqi capital, Baghdad. This attack marked the start of the US-led effort to chase down Saddam Hussein.
US President George Bush delivered a speech that was broadcast live shortly after the missile launches began. He vowed to disarm Iraq and free the Iraqi people.
Bush accused Saddam Hussein of holding weapons of mass destruction. The US attack on Iraq was ordered two hours after the final 48-hour deadline expired for Saddam Hussein to leave Iraq. US sources said five key members of the Iraqi regime, including the Iraqi leader himself, were targeted in the first attack.
Iraq said several non-military targets had been hit and scores of civilians injured in Doura, a southern suburb of the capital. The air raid began at 5:34 am local time. Shortly thereafter, Iraqi TV broadcast what was said to be a live speech by Saddam Hussein.
"I don't need to remind you what you have to do to defend our country. Let the infidels go to hell, you will win, Iraqis," Saddam Hussein said.
President Bush initially played down hopes of his first victory. In his broadcast to the American people, Bush warned that this invasion campaign could be longer and more difficult than some had predicted.
He continued: "It will not be a half-assed campaign and we will not accept any result other than a win." 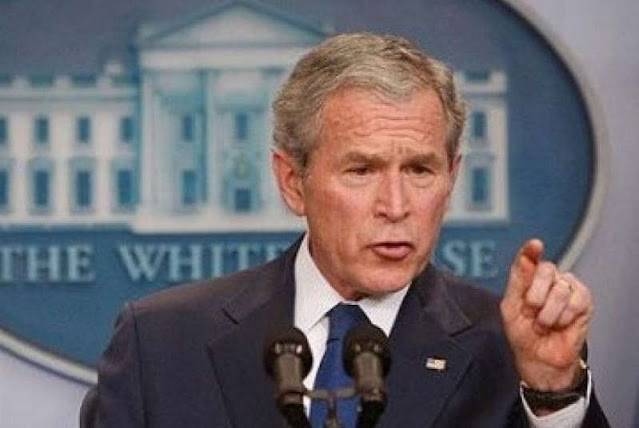 "The dangers to our country and the world will be overcome. We will get through this time of danger and continue the work of peace. We will defend our freedom. We will bring freedom