Home » News » 'I felt dead inside': Russian expat's pain over war in Ukraine

'I felt dead inside': Russian expat's pain over war in Ukraine

'I felt dead inside': Russian expat's pain over war in Ukraine

daajis.com:- A Russian-Ukrainian couple from Spain have been speaking of the heartwrenching pain and division caused by Moscow's war.
Polyna Korneva and Vadym Kyrylyuk are based in Madrid.
She is Russian and says her condemnation of Putin's war in Ukraine has caused a separation from her family, who live 500 kilometres south of Moscow.
"When I realised that most of them were in favour, that's when inside I felt dead," Polyna told Euronews. "I felt that my heart is bleeding. I felt a pain that I have never felt in my life."
Her partner Vadym is Ukrainian. The situation is so traumatic he now divides Russians into those for or against the invasion, with no possibility of neutrality.
"There are other people who are Russian nationals that I have broken with them, that I will never be able to maintain any kind of any kind of relationship with them," he said.
The couple's position is shared by the Very Rev Andrey Kordochkin, dean of the Cathedral of St Mary Magdalene in Madrid and secretary of the Russian Orthodox Church’s diocese in Spain. 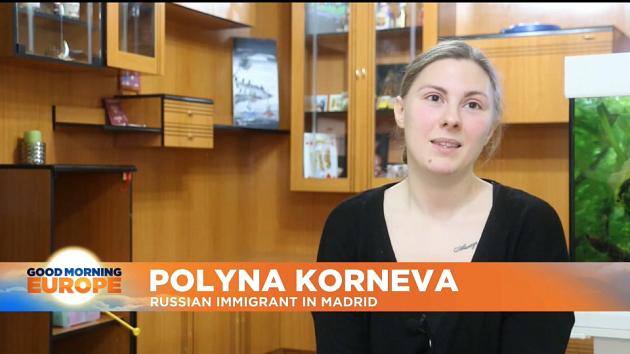 Every weekend, his congregation consists of 200 people, most Ukrainians. They are among the 115,000 Ukrainians who call Spain home. There are around 95,000 Russians in the country.
"I think he is a man with a grandiose vision of himself," said the Very Rev Kordochkin. "I am not a psychiatrist, but it is something that characterises psychopaths and people who suffer from narcissism, but he is not the only person like that in history."