daajis.com:- An adviser to the Ukrainian Interior Ministry said, on Sunday, that Russia has begun destroying fuel and food depots in Ukraine, and alternately bringing troops to the common border between the two countries.
Kyiv has asked the International Committee of the Red Cross not to open a planned office in Russia’s Rostov-on-Don, saying this would legitimize Moscow’s “deportation” of Ukrainians. Follow all developments in Ukraine on our live blog. All times are in Paris [GMT + 1].
8:38 a.m.: Fighting between Ukrainian and Russian forces continues northwest of Kyiv, fighting between Ukrainian and Russian forces continues in the northwest outskirts of Kiev on Saturday, and the Ukrainian military command said Russian forces are “gathering together” southwest of the capital. Gulliver Cragg reports from France 24.
8:19 a.m.: Russia destroys fuel and food storage depots, Ukrainian Interior Ministry adviser says Russia has begun destroying Ukrainian food and fuel stockpiles, which means the government will have to disperse their stockpiles in the near future, Ukrainian Interior Ministry adviser Vadim Denisenko said Sunday .
Speaking to local television, Denisenko said that Russia is bringing troops to the Ukrainian border in turns, and could make new attempts to advance its invasion of Ukraine. 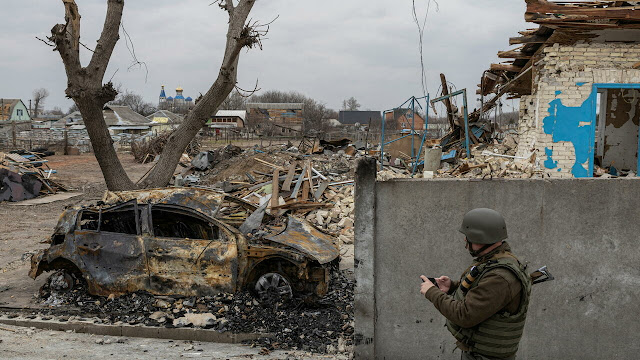 8:18 am: Ukraine asks Red Cross not to open office in Russia near border Ukraine asks ICRC not to open planned office in Russia’s Rostov-on-Don, saying it would legitimize Moscow’s “humanitarian corridors” and kidnapping Ukrainians are forcibly deported.
The head of the International Committee of the Red Cross said Thursday after talks with Russian Foreign Minister Sergei Lavrov that an agreement between the Russian and Ukrainian militaries is necessary before civilians are properly evacuated from war-torn Ukraine.
Russian media reported that the head of the Red Cross, Peter Maurer, asked Russia to facilitate the opening of an office of the Red Cross in Rostov-on-Don.
Mikhailo Radutsky, head of the Public Health Committee of the Verkhovna Rada, appealed to the Red Cross to change its plans.
“The committee calls on the ICRC not to legalize ‘humanitarian corridors’ on the territory of the Russian Federation, as well as not to support the abduction and forced deportation of Ukrainians,” Radotsky said in a statement. statment.
Rostov-on-Don is the largest Russian city on the eastern border of Ukraine and the administrative capital of the Rostov region, and Russia has used them as temporary accommodation camps for people being transported out of the war zone.
(France 24 with Agence France-Presse, Associated Press, and Reuters)