daajis.com:- North Korea says it test-fired its biggest-yet intercontinental range ballistic missile under the orders of authoritarian leader Kim Jong Un, who vowed to expand the North’s “nuclear war deterrent” while preparing for a “long-standing confrontation” with the United States.
The report by North Korean state media on Friday came a day after the militaries of South Korea and Japan said they detected the North launching an ICBM from an airport near capital Pyongyang in its first long-range test since 2017.
The launch extended a barrage of weapons demonstrations this year that analysts say are aimed at forcing the United States to accept the idea of North Korea as a nuclear power and remove crippling sanctions against its broken economy that has been further damaged by pandemic-related difficulties.
The Hwasong-17 ICBM, which was fired on a high trajectory to avoid the territorial waters of neighbors, reached a maximum altitude of 6,248 kilometers (3,880 miles) and traveled 1,090 kilometers (680 miles) during a 67-minute flight before landing in waters between North Korea and Japan, Pyongyang’s official Korean Central News Agency said.

The agency claimed the test met desired technical objectives and proved that the ICBM system would be promptly operated during wartime conditions. 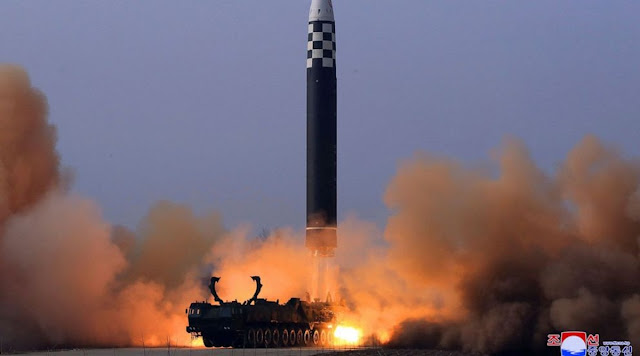 The South Korean and Japanese militaries had announced similar flight details, which analysts say suggested that the missile could reach targets 15,000 kilometers (9,320 miles) away when fired on normal trajectory with a warhead weighing less than a ton. That would place the entire U.S. mainland within striking distance.

Believed to be about 25 meters (82 feet) long, the Hwasong-17 is the North’s longest-range weapon and, by some estimates, the world’s biggest road mobile ballistic missile system. The missile was first revealed in a military parade in October 2020 and Thursday’s launch represented its first full-range test.