daajis.com:- Ukrainian President Volodymyr Zelenskyy criticised European Union leaders, saying that sanctions and support for Ukraine came "a little late".
"You have applied sanctions. We are grateful. These are powerful steps but it was a little late," Zelenskyy said in an address to the EU council.
"If it had been preventive, Russia would not have gone to war. At least no one knows for sure. There was a chance," he added.
He commended Germany for blocking Nord Stream 2 but again reiterated that the move could have been more timely.
The Ukrainian president also reiterated a plea to join the European Union, begging leaders not to "be late" on letting the country in.What are the latest updates on the situation?
Civilians are starving in Mariupol, the city council said in a statement on Telegram, emphasising that "more and more people are left without any food supplies" in the port city that has been under siege since early March.
Ukrainian forces are striking "high-value targets in Russian-occupied areas of Ukraine" including a landing ship, the UK Ministry of Defence has said.
The UK added on Friday that Ukraine has re-occupied towns up to 35 kilometres east of Kyiv.
US President Joe Biden will travel to Poland on Friday close to the border with Ukraine as the country hosts more than two million refugees.
Ukraine's armed forces said in a statement that a large Russian landing ship was destroyed during an attack on the Berdyansk port. Large landing ships "Caesar Kunikov" and "Novocherkassk" were damaged, they added. 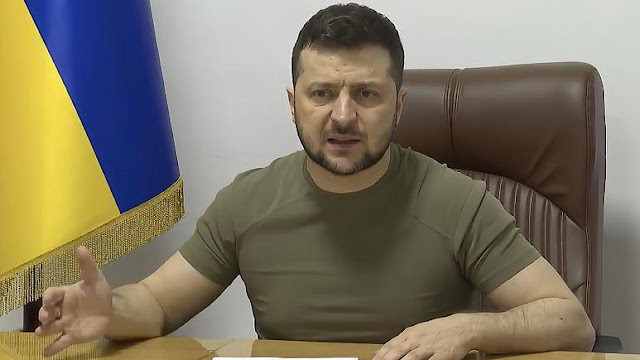 Russia is running out of precision-guided munitions, a senior Pentagon official said, according to Reuters.
Russians and Ukrainians exchanged prisoners on Thursday, according to the Ukrainian deputy prime minister and the Russian human rights delegate.
At least 135 children have died in the war in Ukraine, according to Ukraine's human rights commissioner Lyudmyla Denisova.