Taliban orders middle and high schools for girls to close

Taliban orders middle and high schools for girls to close

daajis.com:- No sooner had Afghanistan's middle and high schools for girls opened for a new academic year, the Taliban ordered them shut.
A television crew was filming a lesson in a class at Zarghona High School for Girls in the capital Kabul on Wednesday morning when a teacher entered and ordered the students to go home.
The latter, who were rejoicing in their return to school for the first time since the Islamic fundamentalists took power last August, closed their books, packed their things, and left the classroom in tears.
"Yes it's true," Taliban spokesman Inamullah Samangani told AFP without further comment, confirming reports that the girls across the country had been asked to return home.
No Taliban official was immediately reachable to explain the reason for this decision.
"We have no right to comment," education ministry spokesman Ahmad Aziz Rayan said simply.
"I saw my students cry and hesitate to leave class. It's very painful to see your students cry," said Palwasha, a teacher at the Omara Khan girls' school, also in the capital.
Deborah Lyons, UN Special Representative for Afghanistan, has described reports of school closures as "disturbing".
"If true, what could possibly be the reason?" she asked on Twitter.

Hearing disturbing reports that female students above the sixth grade will not be invited back to school by the authorities,   If true, what could possibly be the reason? 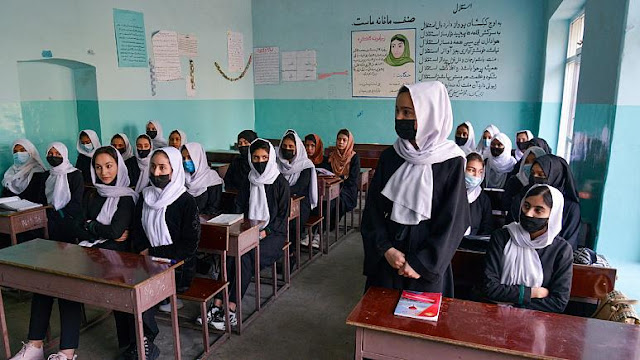 The international community has made the right to education for all a stumbling block in negotiations on aid and recognition of the fundamentalist Islamist regime. Several countries and organisations have proposed paying teachers.
The ministry of education had however announced the resumption of classes on Wednesday for girls in several provinces, except those of Kandahar (South), the cradle of the Taliban, which was to reopen next month.
"We are not reopening schools to please the international community, nor to gain recognition from the world," spokesman Aziz Ahmad Rayan told AFP.
"We do this as part of our responsibility to provide education and educational facilities for our students," he added.
The Taliban had insisted they wanted to take the time to ensure that girls aged 12 to 19 would be kept separate from boys and that schools would operate according to Islamic principles.
Before the Taliban's about-face, girls interviewed by the AFP news agency when schools opened said they were "happy" to return to class and even thanked the Taliban.
Around 07:00 (03:30 CET), several hundred students rushed to the entrance of the Zarghona high school for girls, one of the largest establishments of this type in the capital.
Dressed in black or coloured abayas -- a large garment covering the whole body -- or long coats, with an often white scarf covering their head, the lower part of the face hidden by a sanitary mask, the adolescent girls crossed the large blue door of the high school.
"When I arrived, I saw that the school doors were open and that all the students were coming, that made me very happy, and then I came to greet my teachers," Sadaf, a 16-year-old student in this high school, said.
"We thought that we might not have any progress for our future. For the past eight months, we have been at home and we have tried to study our books. I hope that with the Islamic Emirate (name of the Taliban regime), there may be more development," said the teenager who wants to become a doctor.
Schools in other provinces had also opened in the morning, such as in Panchir (Northeast), Kunduz (North) or Herat (Southwest), before closing their doors.
"Today is a very beautiful day," enthused Marjan, a first-year student at Gawharshad High School in Herat.