daajis.com:-  People stand in a queue to board a bus in Sievierodonetsk in the Luhansk region of Ukraine on March 21. (Oleksii Kovalov/Reuters)
A temporary ceasefire was expected to come into force at 9 a.m. local time Wednesday to allow civilians to flee the Luhansk region of eastern Ukraine, according to local Ukrainian administrator Governor Serhiy Gaidai on social media.
The post detailed gathering places where civilians could arrive before getting on trains taking them away from Luhansk, which sits in the disputed Donbas region.
“Attention!! A humanitarian corridor has been agreed: residents of Rubizhne, Lysychansk, Severodonetsk, Hirska Community (specifically, Nizhne) will be evacuated today,” Gadai wrote. 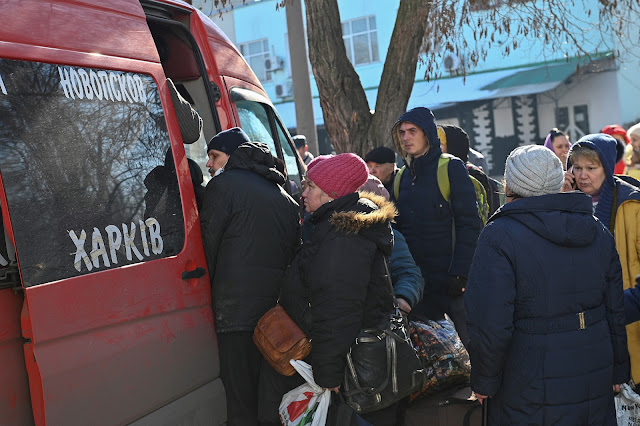 Some context: Fierce fighting has gripped the Luhansk region including the alleged Russian shelling of an elderly care home, killing 56 people on March 11. On Monday, the Ukrainian Ministry of Foreign Affairs accused Russian forces of forcibly deporting 2,389 children from Donetsk and Luhansk region in an incident the US Embassy labeled “kidnapping." Russia said 16,434 people, including 2,389 children, were evacuated a day earlier of their own volition.