daajis.com:-  British aid cuts will lead to the closure of hundreds more Syrian schools, with 40,000 children already having fallen out of education as a result of the move, a leading charity has warned.
UK funding for 133 schools run by Syria Relief ended on April 30 as the government “rushed” through a £4.2 billion ($5.3 billion) cut in foreign aid spending that slashed Britain’s total commitment from 0.7 to 0.5 percent of gross national income.
“If funds are not found the plug the gap, a generation of children in northern Syria will be out of school,” Jessica Adams, head of communications for the charity, told The Guardian.
“This will lead to a close-to-immediate rise in child labour, child marriage, early pregnancies, child conscription to military and armed groups, and child exploitation and trafficking.
“This was a political choice we, children, parents and teachers hope desperately will be reversed.”
Syria Relief had been the largest non-government provider of schools in the country, at one point operating 306 schools.
But donors have reduced their spend or shifted their focus to Ukraine, leaving the charity with just 24 remaining schools supporting 3,600 children. 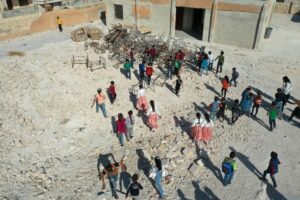 UK cuts hit Syria hard, removing 69 percent of aid, which the charity said would push more girls into early marriages rather than Britain’s “stated goal” of helping them into school.
Abu Halid, whose children are at school in Mahmoodli displacement camp in northern Syria, told The Guardian: “If this school closes, we’ll have to send them to schools that ask for money, but we don’t have money, not even for rent, so we need the school to stay open.”
Syria Relief said camp schools are overcrowded, lack electricity or heating, and already-high rates of child labor and early marriages will increase with more school closures.
Joyce Msuya, assistant secretary-general for the UN Office for the Coordination of Humanitarian Affairs, told the Security Council last week that an estimated 14.6 million Syrians are in need of humanitarian aid, with 2.4 million children out of school in the country.
“Unless we significantly scale up our support, even more are at risk of dropping out,” she added. “Rapid and substantial investments are now required to help us break the vicious cycle.”