daajis.com:-Britain’s former Prime Minister Tony Blair reportedly urged Kuwait to buy the United Kingdom’s latest artillery to compensate for supporting the Gulf country during the Gulf War, newly released documents revealed.
Blair tried to persuade Kuwait’s Sheikh Sa’ad between 1998 and 1999, including calling in on him during a brief layover on a flight home from South Africa, UK news media The Guardian reported on Tuesday.
Internal briefing notes from the time suggested that the UK government believed it was “due the award of a significant defense equipment contract in recognition of its defense of Kuwait” after the invasion by the then-Iraqi President Saddam Hussein in 1990.
Notes from the hastily arranged bilateral talks between Kuwait and the UK in January 1999 revealed that Blair took Foreign Office officials’ request to talk up the AS90 howitzer (self-propelled artillery weapon) in account amid concerns that the weapons deal would go to the US and its M109 howitzer.
“The prime minister raised the AS90. It was an effective weapon, although he knew the US had offered the M109. He hoped very much that all the support we had given Kuwait would be remembered,” a restricted memo from Downing Street’s private secretary Philip Barton to his colleague in the foreign office Tim Barrow covering the meeting between Blair and the Crown Prince read.
“The crown prince said that the price of the AS90 was very high,” it added. 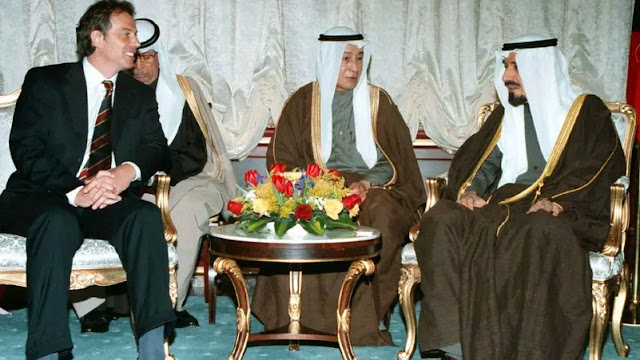 “The prime minister pointed out that it would do the job properly. The defense minister said that they would take the state of relations with the UK into account.”
Blair was also reportedly told that the government was “frankly disappointed” to have “won so little Kuwaiti defense business since [the] end of [the] Gulf war,” claiming to be a “loyal friend to Kuwait over many years,” internal briefing notes from the day before the visit showed. The notes were a part of the files released by the National Archives in Kew.
Barton then reported that Kuwait “would keep [the UK] in mind” prior to deciding on the matter

This came after several attempts by the UK government at the time to convince the Kuwaitis into buying weapons from them. Documents showed that Blair sent a letter to the crown prince three months earlier in which he described the AS90 as “the best 155mm gun in the world today,” stating that it was more superior than its US equivalent.
“This order from Kuwait is very important to the UK and to our industry at a difficult time. We will await your decision eagerly,” Blair wrote.
Despite his efforts, Kuwait announced its intention to buy US artillery two after the UK prime minister’s visit, not reaping immediate rewards.