Feature: A U.S.-Mexico border wall to erect in people’s heart

Feature: A U.S.-Mexico border wall to erect in people’s heart

daajis.com:- File photo taken on Feb. 15, 2016 shows migrant people reunion with their beloved at the border between Mexico and the United States in Anapra, Chihuahua state, Mexico.  (Xinhua/Guillermo Arias)

MEXICO CITY, Feb. 23 (Xinhua) — A good sleep can no longer help Victor Navares fully recover after a day’s work as there might be a wall between home and work.

Navares drives two hours from the Mexican town of Ensenada across the border to work for a U.S. company.

“If (U.S.) President (Donald) Trump can build a border wall, there might be a day he bans all Mexicans from entering the U.S.,” the Mexican designer told Xinhua.

The what-if haunts him in particular when he passes U.S. border control every weekday. He senses stricter screening and sometimes he has to wait for up to two hours.

“I’ve no idea whether President Trump’s policy will make big changes to my life or not,” he said.

Trump on Jan. 25 signed an executive order for a “physical barrier” to be built along the U.S.-Mexico border of nearly 3,200 km.

“Not every Mexican would commit crimes, it cannot solve any problem by erecting a wall. It is rather more important to help more people in need,” Yami Ponce said.

The 17-year-old girl live in Mexico’s border city of Tijuana and attends high school in San Diego in the United States. It is her dream to study law and provide legal help for immigrants.

“I just hope the border wall will not affect my studies and life,” she said.

Vincent, a Walmart salesman in El Centro, California, said: “Nothing will change. There used to have those thin fences along the border, now they’ve replaced them with stronger metal fences. But people still come across the border to buy things or work. I do not think a wall will stop them.” 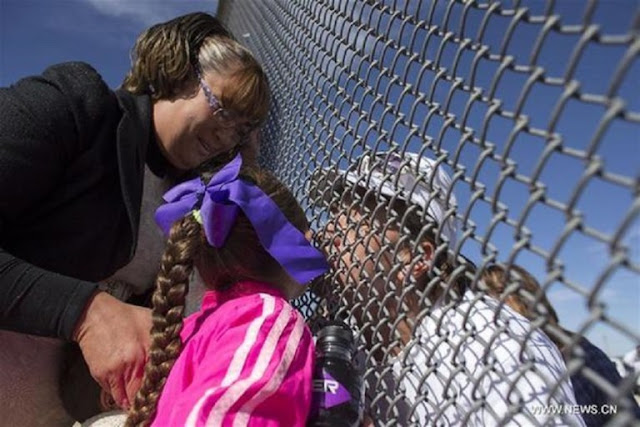 Vincent, who only gave his first name, immigrated from Mexico years ago. He said most of the Mexicans working in El Centro, legally or not, do not really want to live in the United States. They just come to make more money in order to spend them back in Mexico.

“They only make 4 U.S. dollars a day over there, but here, they make a few times more than that. One day here equals one week there,” he told Xinhua.

Vincent said the U.S. employers do want those Mexicans to stay since Americans would not do the work they are doing.

However, the U.S.-Mexico border wall is believed to be more like a symbol. Local businessmen said the “tax wall” Trump has threatened against Mexican products will matter more. The latter one can bring down the local economy, they said.