daajis.com:-  A 17-year-old boy is in serious but stable condition after being brutally attacked by a gang in the British capital for being an asylum seeker.

The Kurdish-Iranian refugee was waiting at a bus stop with two friends in Croydon, south London, on Friday, when he was approached by about eight people.

“The suspects asked the victim where he was from and when they established that he was an asylum seeker they chased him and launched a brutal attack,” Detective Sergeant Kris Blamires said in a statement on Saturday.

“He has sustained serious head and facial injuries as a result of this attack, which included repeated blows to the head by a large group of attackers,” he added.

The 17-year-old was taken to a London hospital for treatment, while his two friends escaped with minor injuries.

Police appealed for information and witnesses and said they were treating the attack as a hate crime.

No arrests have been made.

The UK has seen a surge in xenophobia attacks following Britain’s vote to leave the European Union last year.

Much of the Brexit debate focused on a perceived influx of migrants into Britain from other EU countries – and whether their presence was making it harder for Britons to find work, housing and medical care.

Within days of the June 23 referendum, Polish communities reported a series of incidents, including the distribution of leaflets describing them as “vermin” and racist graffiti outside a cultural centre in London.

Police recorded 1,546 racially or religiously aggravated offenses in England and Wales in the two weeks before the June 23 referendum, and 2,241 in the two weeks after it, the Home Office said. 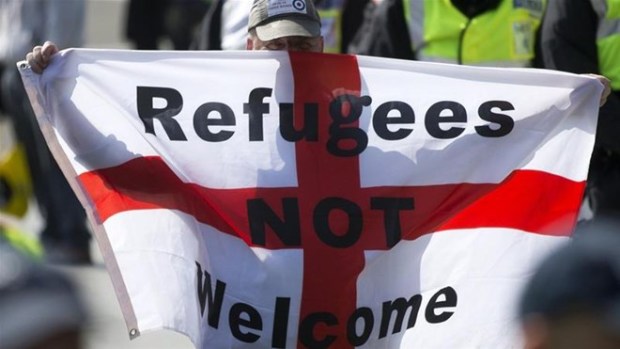 The total for July was up 41 percent from the same month a year earlier.

Nigel Farage, the then leader of the anti-EU UK Independence party, unveiled a poster featuring a queue of hundreds of refugees entering Europe with the caption “Breaking Point”.

The image was roundly condemned by British politicians, including members of his own party, and some activists on social media compared it to propaganda images used by the Nazis.