daajis.com:- Al shabaab suspect found with a ‘rucksack full of knives’ near Parliament Square was allegedly a friend of a British jihadist known as the ‘White Beast’ who died fighting for the al-Shabaab terror group.

It was revealed by MailOnline that Khalid Mohammed Omar Ali was an aid worker who had travelled in a relief convoy to Gaza.

But now it has emerged that jihadi Thomas Evans was also in the group who travelled there from London with the charity Road to Hope in 2010, according to reports.

Evans was shot in Kenya while fighting for the African terrorist group al-Shabaab in 2015.

Whitehall terror suspect Khalid Mohammed Omar Ali, pictured left, was on the same trip to Gaza in 2010 as jihadi Thomas Evans, pictured right, according to reports.

He had been linked to the world’s most wanted woman – ‘White Widow’ Samantha Lewthwaite – over an attack that left 50 innocent villagers dead in the Kenyan countryside in June 2014.

His mother told The Sunday Telegraph that she believes her son was radicalised on the aid trip which saw the pair stuck in Libya.

Sally Evans – who reported her son to the authorities following the journey to Gaza – said: ‘After he returned from that trip he began interpreting Islam more strongly. He was upset about he had seen there.

‘He was already a Muslim but he became more radicalised on his return. I do feel that was the case.

‘It needs to be investigated. I’m shocked they were both on the same trip.’

In footage of the convoy, Ali can be seen with a Palestine banner tied round his head. 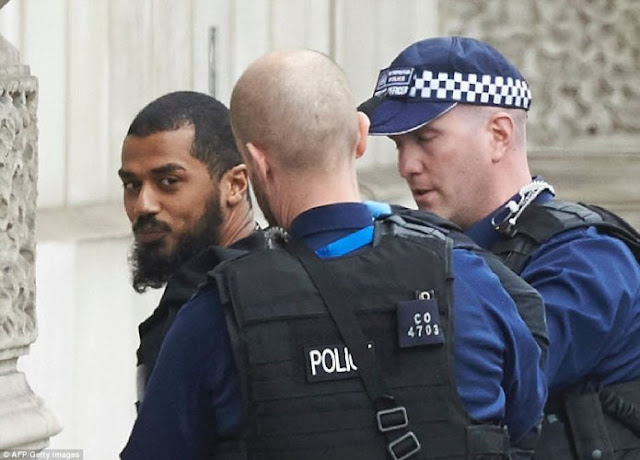 Footage from 2010 shows a young Khalid Mohammed Omar Ali – now 27 – sitting excitedly in the front of his van as he prepares to drive from London to Gaza.