daajis.com:- Fluffy white snow covering desert sand in Saudi Arabia … it seems unreal, but the spectacular phenomenon is not so rare. On January 1, snow fell in northwestern Saudi Arabia, in the city of Jebel al Lawz in the province of Tabuk. Some people rushed to the area and took great videos of the place.
One of the videos shows a man throwing his hand in what appears to be sand. But under a thin layer of orange sand there is a thick snow bed. The result of desert sand covering the snow reminded some Internet users of a familiar Italian dessert: tiramisu.
Many curious people flocked to the area to see the snow. Some men sang traditional songs in honor of the first snowfall, which usually occurs later in the year.
The annual snowfalls have been more significant since 2018. The National Center for Meteorology warned Saudis of severe thunderstorms in several parts of the kingdom earlier this week. 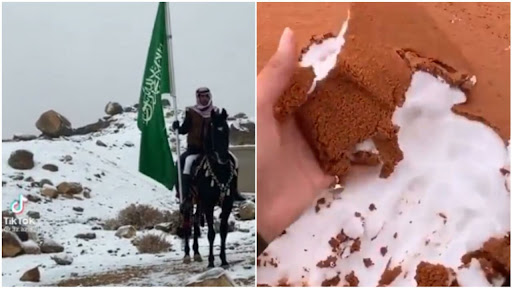