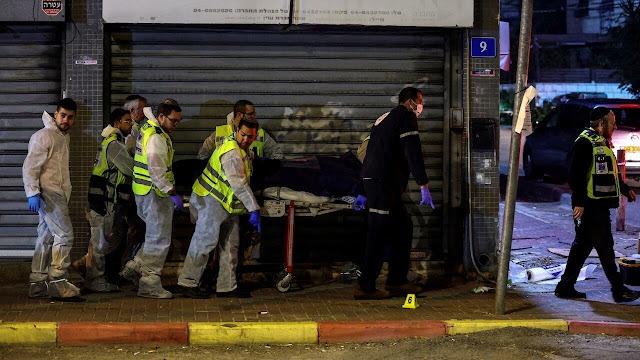 Police said the attackers killed two members of the Israeli paramilitary Border Police. The two gunmen were shot dead by police officers who were having dinner at a nearby restaurant.
“Fortunately, our officers were able to neutralize the attackers and prevent a larger terrorist attack,” National Police spokesman Eli Levy told Israel’s Kan TV.
In the Negev desert in southern Israel, the foreign ministers of the United Arab Emirates, Bahrain and Morocco, three countries that normalized relations with Israel in 2020, held a summit in the presence of Blinken.
Israeli Foreign Minister Yair Lapid “branded the foreign ministers participating in the Negev summit on the details of the terrorist attack in Hadera,” on Twitter the Israeli Ministry of Foreign Affairs.
“All foreign ministers condemned the attack and asked to send their condolences to the families of the victims and their best wishes for the recovery of the wounded,” the ministry said.
Israeli security officials have warned against an escalation of attacks on Israelis in the run-up to the Muslim holy month of Ramadan in April – a turbulent period in the past.
Jordan’s King Abdullah is due to meet Palestinian President Mahmoud Abbas in the occupied West Bank on Monday, in what Israel widely sees as an attempt to calm tensions ahead of the holiday period that also includes Easter and Passover.
(Reuters)