daajis.com:- A total of 20 Russian warplanes have been confirmed to have fallen as victims of the war in Ukraine over the past two months. The latest is the Su-35S fighter jet known by NATO as the 'Flanker-E', one of Russia's most advanced fighter jets. Photos of the downed multi-role fighter jet were shared on Ukrainian military social media this week.
The Su-35S is an evolution of the Cold War-era Su-27 Flanker, a heavyweight fighter jet dedicated to air superiority. Just as the American F-15A Eagle gradually metamorphosed into the F-15EX Super Eagle multi-role fighter jet, so the Su-27 at the same time became the Su-35S.
The Su-35S is the most advanced fighter jet in the forefront of the Russian Air Force today. Developed by the legendary Sukhoi Design Bureau, this fighter jet is a single-pilot Su-35. This aircraft has a length dimension of 21.6 meters, a wingspan of 15.2 meters. On the engine is the AL-41F-1S which gives it a maximum flying speed of Mach 2.25 or the equivalent of 2,777.7 kilometers per hour.
In the pilot room, the Irbis Radar is capable of detecting enemy fighter jets up to a distance of 400 km. While the carrying capacity is up to 8 tons of fuel and weaponry on external hard-points on the wings and body. All that makes the Su-35S quite heavy; because he is still armed with 27.9 tonne air-to-air missiles. Even so, the high thrust-to-weight ratio, as well as the thrust-vectoring control, gives the fighter jet impressive maneuverability. 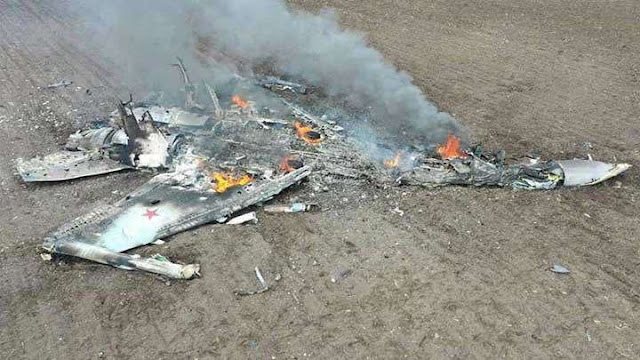 The Su-35 is often referred to as a fifth-generation fighter jet -- such as the US F-22 Raptor or F-35 Joint Strike Fighter. Its offensive and defensive systems, as well as its sensors, are among the most advanced Russia uses. The Su-35S is intended as a transitional fighter jet before the Su-57 is ready for production.
Remains of a Russian Su-35 fighter jet shot down by the Ukrainian military during Russia's attack on Ukraine continues in the Kharkiv region of Ukraine, in this leaflet image released April 3, 2022. Ukrainian troops manage to shoot away one of Russia's best fighter jets amid the war Russia-Ukraine reached the 39th day. Press service of the Ukrainian Armed Forces General Staff/Handout via REUTERS
Ukrainian air defenses have claimed responsibility for the downing of the fighter jet. The defense system is quite old, relying almost entirely on ex-Soviet air defense systems such as the S-300 long-range surface-to-air missile. More advanced surface-to-air missiles, such as the US-supplied Stinger, can be more lethal to Russian fighter jets, but require them to fly at an altitude of 3,048 meters or lower to be targeted.
The pilot, according to Ukrainian sources, managed to eject and was arrested.