daajis.com:- Belarus, a Moscow ally that shares a border with Ukraine, conducted “surprise” military drills on Wednesday to assess its army’s reaction capability, according to the defense ministry.
Belarusian military forces were putting their readiness to “go on notice, relocate to preset zones, and conduct combat training,” according to a statement from the ministry.
“The goal is to assess military readiness and ability to respond quickly to a potential crisis,” the statement said, describing the maneuvers as a “surprise” exercise.
It released images of columns of vehicles, including tanks, going down roadways.
Kyiv, which has repeatedly accused Belarus of plotting to send troops into Ukraine to aid Russia’s military effort against its pro-Western neighbor, will be keeping a careful eye on the drill.
For for 30 years, Belarus has been dominated by strongman Alexander Lukashenko, a close supporter of Russian President Vladimir Putin. Moscow uses the country as an air and logistics base.
Nonetheless, not all Belarusians support participation in the current conflict, however indirect, and there have been acts of sabotage in recent months, with some individuals detained. 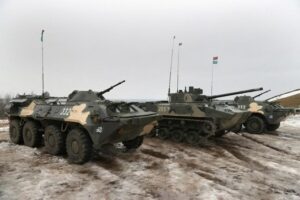 In 2020, protests erupted in Belarus over Lukashenko’s purportedly fraudulent re-election, prompting the president to unleash a ruthless crackdown on the opposition.