daajis.com:- Ankara, Moscow and Tehran will discuss the ongoing civil war in Syria and the fight against terrorism during an Astana format meeting between the three countries’ leaders in Iran on Tuesday.
President Recep Tayyip Erdoğan arrived in Iran at the invitation of his Iranian counterpart Ebrahim Raisi.
Erdoğan and Raisi will co-chair the seventh meeting of the Turkey-Iran High-Level Cooperation Council in Tehran on July 19, the Turkish Presidency said in a statement.
"All aspects of the Turkey-Iran relations and potential steps that would enhance the bilateral cooperation will be discussed during the Council Meeting, which will be held with the participation of relevant ministers," it added.
Besides bilateral relations, regional and global matters will also be discussed, according to the statement.
Russia, Turkey and Iran on Tuesday will gather for the seventh Astana meeting.
The Astana process initiated under the leadership of Turkey and Russia to bring a cease-fire and conflict processes under control in Syria continues to be used as a platform where political and humanitarian issues are discussed.
The peace process was launched in January 2017 at the initiative of Turkey, Russia and Iran. Its meetings also contribute to the advancement of a United Nations-led diplomatic process in Geneva.
After the three countries met last month in Kazakhstan, the parties released a joint statement, saying that they “condemned the increased presence and activities of terrorist groups and their affiliates under different names in Syria. They highlighted the necessity to implement all arrangements related to the north of Syria.”
All three are involved in Syria, with Russia and Iran supporting the Damascus regime against its opponents, and Turkey backing the opposition.
Possible operation
Tuesday’s summit also comes as Turkey has vowed to launch a new operation in northern Syria to eliminate terrorism.
Erdoğan had said that Turkey would launch new military operations in Syria to extend the 30-kilometer (20-mile) deep "safe zones" along the border, aiming at the Tal Rifaat and Manbij regions and other areas further east.
Erdoğan has said that since the United States and Russia have failed to live up to their commitments to provide a safe zone along the border region, Turkey is ready to mount an operation to protect the nation and locals in northern Syria from the PKK terrorist group and its Syrian offshoot, the YPG.
In October 2019, Russia committed to removing the terrorist group from Tal Rifaat and Manbij after reaching an agreement with Turkey during Operation Peace Spring. Moscow also promised that the terrorists would be pulled back 30 kilometers from the border on the M4 highway and in the area outside the Operation Peace Spring zone.
The YPG/PKK mostly carries out terrorist attacks in Manbij, Ain al-Arab and the Tal Rifaat district of Aleppo, even using these regions as bases for its attacks. The YPG, which occupies roughly a third of Syria’s territory with the support of the United States, frequently targets Azaz, Marea, al-Bab, Jarablus, Afrin, Tal Abyad and Ras al-Ain in the north of the country with heavy weapons.
Turkish-backed operations in previous years have ousted the YPG/PKK from the northwestern enclave of Afrin and a series of border towns further east. Since 2016, Ankara has launched a trio of successful counterterrorism operations across its border in northern Syria to prevent the formation of a terror corridor and enable the peaceful settlement of residents: Euphrates Shield (2016), Olive Branch (2018) and Peace Spring (2019).
Iran, whose President Raisi is hosting the meeting, has claimed that any Turkish military action in Syria could "destabilize the region" while late last month, Iran's top diplomat said in Ankara that "we understand that ... maybe a special operation might be needed".
"Turkey's security concerns must be tackled fully and permanently." 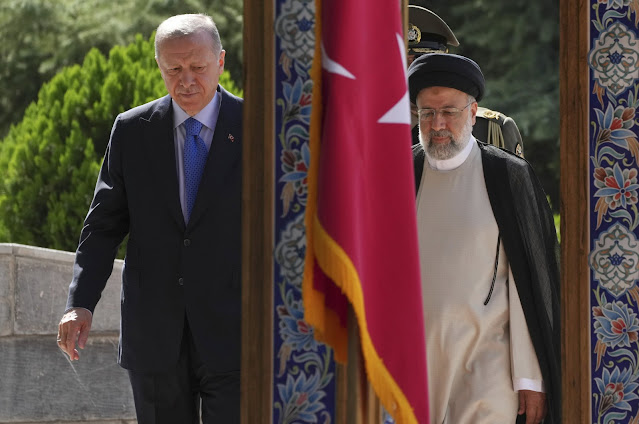 Days later, Iranian Foreign Minister Hossein Amirabdollahian said in Damascus that Turkish military action in Syria "would be a destabilizing element in the region."
Sinan Ülgen, a visiting scholar at Carnegie Europe who specializes in Turkish foreign policy, told Agence France-Presse (AFP) that Ankara wants the blessing of Moscow and Iran before launching its operation.
"It's particularly important because the two potential target regions are under the control of Russia, and Turkey wants to be able to use the airspace ... so as to minimize the risks," he said.
Iran "also has an indirect presence in the region through Shiite militias that it controls," said Ülgen.
For Iranian political analyst Ahmad Zeidabadi, "new differences" have emerged between Russia, Iran and Turkey following the Ukraine war.
This and an "uncertain future," he said, means the three leaders will try to "coordinate" their views on Syria to avoid further tensions.
Ukraine talks
The Tehran summit will also serve for Erdoğan and Putin to come together for the first time since Russia invaded Ukraine in February. The Turkish president will hold a bilateral meeting with his Russian counterpart on the sidelines of the summit.
The Turkish president has for months been offering to meet the Russian leader and to bring Putin and Ukrainian leader Volodymyr Zelenskyy together in a bid to help resolve heightened global tensions since the war began.
Turkey is one of the most active countries working to ensure a permanent cease-fire between Ukraine and Russia. Its delicately balanced act of assuming a role as a mediator by keeping communication channels with both warring sides open provides a glimmer of hope in diplomatic efforts to find a solution and achieve peace in the Ukraine crisis. With its unique position of having friendly relations with both Russia and Ukraine, Turkey has won widespread praise for its push to end the war.
Since the beginning of the conflict, Ankara has offered to mediate between the two sides and host peace talks, underlining its support for Ukraine’s territorial integrity and sovereignty. While Ankara has opposed international sanctions designed to isolate Moscow, it also closed its straits to prevent some Russian vessels from crossing through them.
In a breakthrough, Russian and Ukrainian delegations met for peace talks in Istanbul on March 29 as the war entered its second month with casualties piling up on both sides.
Turkey also hosted the foreign ministers of Russia and Ukraine in Antalya in March and hosted a four-way meeting recently in Istanbul between Moscow, Ankara, Kyiv and the United Nations to find a solution to the grain and food crisis due to the ongoing war.