daajis.com:- Iraqi security forces have pushed into the southern outskirts of Mosul on the second day of a new offensive to drive ISIL fighters from the city’s western half, as US Secretary of Defense Jim Mattis arrived in Baghdad on an unannounced visit.

Iraqi forces backed by jets and helicopters battled their way to Mosul airport on Monday as they prepared to take on the Islamic State of Iraq and the Levant group’s stronghold in the city’s west bank.

The main focus of Monday’s operations was to secure an area south of the Al-Buseif airport.

“It’s a strategic location because it is on a hill. We have to seize today because ISIL fighters can fight back from there,” Jawdat told AFP news agency near the front line.

Counter-Terrorism Service (CTS), who have urban warfare experience and did most of the fighting in east Mosul, were seen heading across the desert to the western side of Mosul.

They are expected to breach the densely populated western part of the city once other forces have moved all the way up to Mosul’s limits.

ISIL fighters defending Mosul’s west bank have no choice, but to protect their bastion. Bridges across the Tigris in the city have been destroyed and Iraqi forces have cut off escape routes.

Meanwhile, Iraqi police forces in armoured vehicles were moving towards the sprawling Ghazlani military base on the southwestern outskirts of the city according to the AP news agency.

Backed by aerial support from the US-led international coalition, Iraqi police, CTS and regular army troops launched an offensive on Sunday to retake western Mosul from ISIL following a 100-day campaign that pushed the fighters from the eastern half of the city.

The Iraqi forces said they had seized 17 villages from ISIL on Sunday, according to top army commander Abdul Ameer Yarallah. 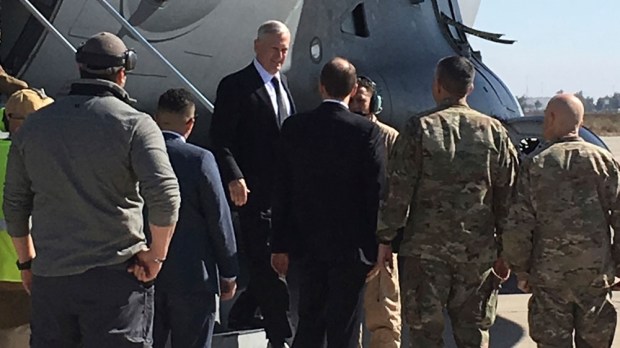 ‘Not here to seize anybody’s oil’

Meanwhile, Mattis, on an unannounced visit to Iraq, said the US “is not in Iraq to seize anybody’s oil”, shifting away from an idea proposed by President Donald Trump that has rattled Iraq’s leaders.

“I think all of us here in this room, all of us in America have generally paid for our gas and oil all along, and I’m sure that we will continue to do that in the future,” Mattis told reporters travelling with him on Monday.

Mattis arrived in Baghdad on Tuesday, as the Pentagon considers ways to accelerate the campaign against ISIL in Iraq and Syria.

Under the president’s deadline, Mattis has just a week to send Trump a strategy to ramp up the fight and defeat ISIL.

Trump has signed an order on January 28 that gives Mattis and senior military leaders 30 days to come up with a new plan to beef up the fight. Any plan is likely to depend on US and coalition troops working with and through the local forces in both countries. 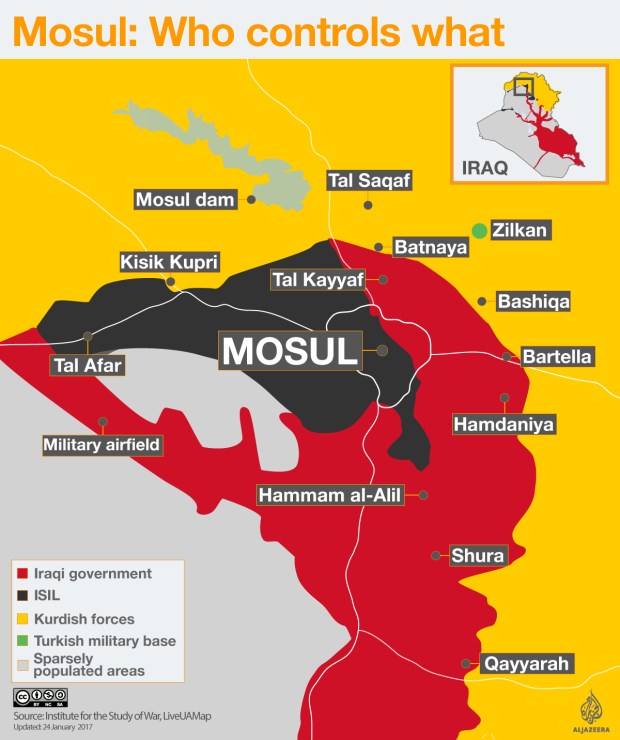 As the fight to take control of ISIL-occupied sections of Mosul continues, about 750,000 civilians are still believed to be trapped in western Mosul.

Aid organisations had feared an exodus of unprecedented proportions before the start of the fighting, which began four months ago with a government push on the east, but a significant majority of residents stayed home.

The aid community fears a bigger exodus from west Mosul, however.

“We are racing against the clock to prepare emergency sites south of Mosul to receive displaced families,” Lise Grande, the UN’s humanitarian coordinator in Iraq, said in a statement.

Save the Children urged all parties to protect the estimated 350,000 children currently trapped in west Mosul.

“This is the grim choice for children in western Mosul right now: bombs, crossfire and hunger if they stay – or execution and snipers if they try to run,” said Maurizio Crivallero, the charity’s Iraq director.