daajis.com:- Malaysian authorities and Interpol are on the hunt for four North Korean men who flew out of Malaysia on the same day that Kim Jong-nam, the half-brother of North Korean leader Kim Jong-un, died after being poisoned at an airport in the capital Kuala Lumpur.

Since Kim’s death last week, authorities have been trying to piece together details of what appeared to be an assassination.

The men arrived in Malaysia on different days beginning on January 31 and flew out of the country on February 13, when Kim died, Ibrahim said.

“I am not going to disclose where they are,” he said, adding that Interpol was helping with the investigation.

Ibrahim showed photographs of the four men, who were travelling on regular – not diplomatic – passports, aged 33, 34, 55 and 57.

He also said there were three other people police wanted to question.

He said that one was North Korean, but that police had not yet identified the other two.

It was not clear if they were suspects or simply wanted for questioning.

A man in his mid-40s, Kim Jong-nam was waiting for his flight home to Macau when, authorities say, he was set upon by two women.

He sought help at an airport customer service desk and said “two unidentified women had swabbed or had wiped his face with a liquid and that he felt dizzy”, Ibrahim said.

Kim died en route to a hospital after suffering a seizure, officials say.

Ibrahim said on Sunday that he expected autopsy results to be released within days.

Investigators also want to speak to Kim Jong-nam’s next of kin to formally identify the body. He is believed to have two sons and a daughter with two women living in Beijing and Macau. 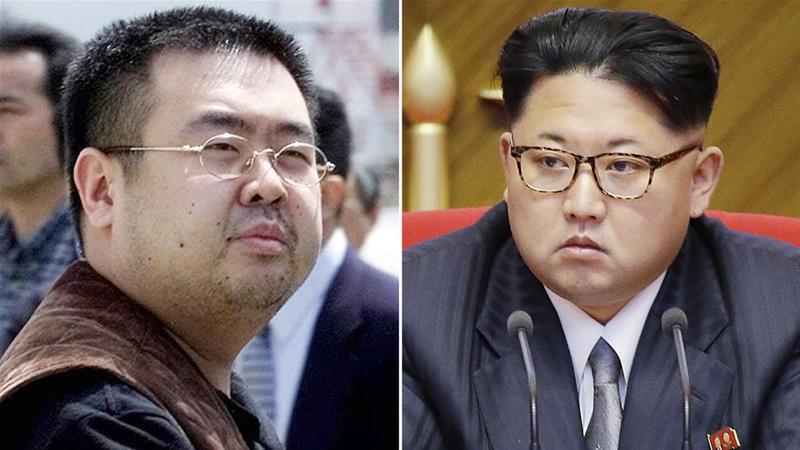 Ibrahim said charges against the four suspects in custody would be determined by prosecutors.

According to police, the Indonesian woman is a spa masseuse and the Malaysian man, a caterer, is believed to be her boyfriend.

The Vietnamese woman works at an entertainment outlet and the North Korean man works in the information technology department of a Malaysian company.

The Indonesian woman has told investigators that she was duped into thinking she was part of a comedy show prank.

Police said the North Korean man’s work permit had expired February 6, a week before Kim’s death.
The case has raised tensions between Malaysia and North Korea.

The Malaysians went ahead with the procedure anyway, saying they were simply following procedure.

Kang Chol, North Korea’s ambassador to Malaysia, said that Malaysia may be “trying to conceal something” and that the autopsy was carried out “unilaterally and excluding our attendance”.

“We are investigating a case of murder … we just follow our rules and regulations,” Ibrahim said.

South Korea has been quick to blame its enemies in North Korea for his death.