daajis.com:- Liverpool just beat the host Aston Villa with a thin score of 1-2 in the postponed match week 33 of the Premier League, Wednesday (11/5/2022) early this morning.
Taking place at Villa Park, Jurgen Klopp's troops had fallen behind through Aston Villa striker Douglas Luiz's goal in the third minute.
Liverpool only lasted three minutes and managed to equalize through Joel Matip.
After the break, Liverpool were able to take the lead thanks to Sadio Mane's effort in the 65th minute.
Sadio Mane's goal at once ended the resistance of Aston Villa who gave up with a score of 1-2.
The success of Sadio Mane as the hero of Liverpool's victory received praise from Jurgen Klopp.
Sadio Mane is likened to a goal machine that is supported by a 'brutal' physique.
The meaning of 'brutal' here is not negative, but the winger of the Senegal national team has the privilege of not getting tired easily.
"He is a goal machine, I told him after the game," said Jurgen Klopp.
"He is a big player. Physically brutal," he continued.
"He combines technique, fighting and physicality when nowadays everyone has fatigue in the legs," Klopp continued.
"You can see it, honestly it's a classy goal. He's a fantastic world-class player," said the 54-year-old tactician.
Not only being a hero of victory, Mane also managed to keep Liverpool's hopes in the Premier League title competition.
Mane made Liverpool comfortable in second place in the Premier League standings with 86 points.
The points obtained by the Reds squad are equal to that of Manchester City, who are at the top of the Premier League standings.
The difference is, Manchester City have only played less because they have only appeared in 35 games.
Liverpool have played one more game, 36 times.
Sadio Mane Discusses Chemistry with Luis Diaz 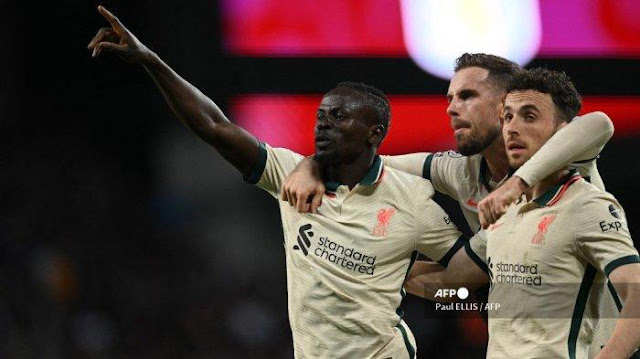 Behind the glory of Mane who scored Liverpool's winning goal against Aston Villa was the role of Luis Diaz.
Luis Diaz played a role as creator of Mane's 15th goal in the Premier League this season.
Diaz's ability to send assists was responded to by Mane, who said that this collaboration had existed since joint training.
He knows what Diaz does when he has space to send the ball.
It was also successfully used by Mane to break into the Aston Villa goal.
"We know each other well from training every day."
"When he gets the ball I know he's going to cross so I'll just be ready for that," said Sadio Mane.