daajis.com:- Kirinyaga residents have raised concerns over increased cases of murder in the county.
In less than two months, 10 people have been hacked to death, sending shockwaves in the region.
The victims are usually eliminated in a cruel manner.
In June alone, seven people have been murdered in the county.
The recent murders involved two members of the same family who were found hacked to death under mysterious circumstances at Mwathaini in Mwea East sub-county.
A man and his sister-in-law were on June 23 separately found dead in their rental rooms, with deep cuts, a clear indication that they were brutally eliminated by unknown criminals.
It is suspected the two were murdered days earlier as their bodies had started decomposing.
Relatives said Simon Mureithi, 57 and his sister-law Waruguru Wachira, 55 were found lying in their beds.
It is suspected the woman whose husband died last year was raped by the killers before her life was snuffed out.
Relatives narrated how they became suspicious when they failed to see the victims for days and went to check them in their rooms only to find them dead.
A relative, John Njoka said the victims lived in separate rental rooms and locals could not know why they were murdered. Njoka said the killers were only interested in eliminating the victims as nothing was stolen from their rooms.
Mwea East police commander Daniel Kitavi said investigations were on to establish the motive behind the heinous act.
“We want to find who murdered the victims and why they did it. We are treating the matter as murder,” he said. On June15, Stephen Murimi, 31, was found murdered and his body dumped in a septic tank at Murinduko village.
A prime suspect in the murder, who is the best friend to the victim was arrested in connection with the killing.
The suspect who was on the run was apprehended at Nanyuki by detectives who were acting on a tip-off and he is being interrogated by police.
A businessman, Daniel Maina, 46, was also found strangled to death and his body dumped in Ragati river in Ndia Constituency. His hands and legs had been tied with electric wires.
Prior to his death, Maina, a cigarette dealer had been spotted in a social place. Kirinyaga police boss David Kabena said investigations were on to establish why the victim was murdered.
An elderly woman, Grace Muthoni Ndambiri, 76 was attacked and killed by her son at Njoga village following a domestic quarrel. Neighbours found the woman lying dead in the bathroom when they responded to the distress calls and reported the matter to Wang'uru police station.
The suspect has gone into hiding as detectives track him down.
Earlier,.Alex Macharia,17 was thrashed to death by his father who accused him of smoking bhang. 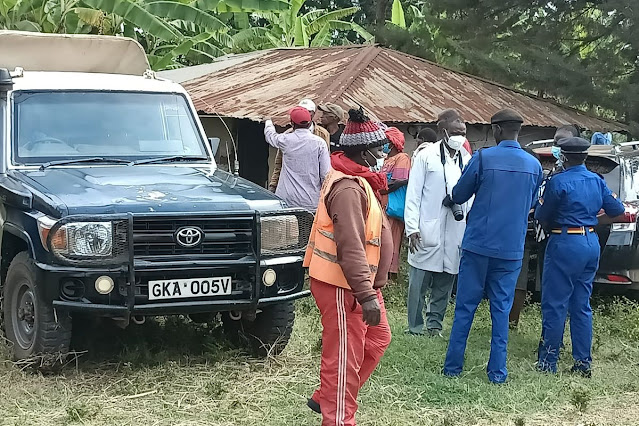 Kutus residents said the assailant hit the victim on the head, flooring him.
However, neighbours came to the rescue of the boy who was rushed to Kerugoya hospital but succumbed to injuries.
A resident, Pastor Simon Njogu said the killings were of grave concern.
“Cases of murders are being reported more often and we are worried. The root cause of these murders should be known and a lasting solution sought,” said Mr Njogu of the Victory Revival Church.
The spiritual leader said the killings demonstrated prevalence of moral decadence in the society, adding that concerted efforts by the church and political leaders as well as the government was required to stop the vice.
Locals said the attacks could scare away investors and called on the police to deal ruthlessly with the offenders.
“Those people who are tarnishing the name of our region by shedding blood should all be sought and legal action taken against them,” another resident, James Karani, said.
FADLAN LIKE SII BOGGA DAAJIS.COM EE FACEBOOK.
_____________________
Xafiiska Shabakada Daajis.com
USA-Alaska
Ceelka@gmail.com
www.daajis.com
Facebook Blogger Plugin by deercali.blogspot.com | Get Widget